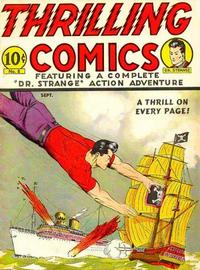 Dr. Strange in the South Seas (Table of Contents: 2)

Dr. Strange gets his limitless powers from Alosun, a miraculous distillate of sun atoms.

[Fenton and the Electrical Machine] (Table of Contents: 3)

Script credit and artist revision from George Mandel to Wexler by Craig Delich.

[Murder In a Riverdale Mansion] (Table of Contents: 5)

A Surprise For Officer Kelly (Table of Contents: 6)

[The Debut of Dan Duffy] (Table of Contents: 8)

Fred Schwab was known to have written this strip in 1940. However, he usually wrote what he drew, and it is known that he wrote and drew this feature in 1940. However, this art is by Daly and therefore writer credit left with a ?.

[The Abduction of Hiram South] (Table of Contents: 11)

Enthusiasm is the Road to Victory! (Table of Contents: 12)

Promotional ad, in part, for the Thrilling Club. To join, the reader is to tear the cover title masthead off and mail it in with an SASE to the editor. There is a coupon to mail in with the masthead, and it asks the reader to select the best three features in Thrilling Comics by checking the appropriate boxes.

Letters from readers are also printed.