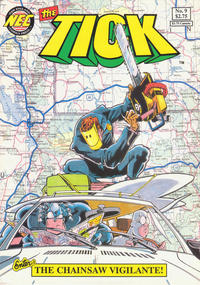 Genre
humor; superhero
Characters
The Tick; Arthur; Mystic Order of Arachnid Vigilance Members; Chainsaw Vigilante; Civic-Minded Five [Oddman; Mr. Envelope; Feral Boy; Radio King]
Synopsis
The Tick and Arthur prepare to leave The City but are accosted by the Tick's fellow escaped insane asylum inmates who have come to worship him. Arthur drives and the Tick navigates as the duo head for New York but our hero has a little trouble with the map (starting with the fact that it is a 1959 edition). After countless miles of driving all over creation, Arthur insists that they do the unthinkable--ask for directions. The Chainsaw Vigilante cuts his way through the rest of the Civic-Minded Five and sets his sights on the Tick and Arthur.
Reprints

Although the story technically has no "coloring" there are flat red colors showing the Tick and Arthur's progress on their map throught the issue; Tick Quick Quip of the Month: "Imagine, a society based on me and my groundbreaking alternative lifestyle! Something like that would be worth any price! Even ten bucks!"

Synopsis
Ben Edlund discusses how the car used in this issue by Tick and Arthur is based on his friends real life vehicle.

Synopsis
Discussion on the lateness of NEC books, and a promise that NEC will do better in 1991.

There are 8 pages of letters including 5 pages printing direct handwritten copies of fan letters as well as drawings and photos.