On sale date as given in the copyright application as listed in the Catalog of Copyright Entries, Periodicals, 1952, page 66, registration number B365106. 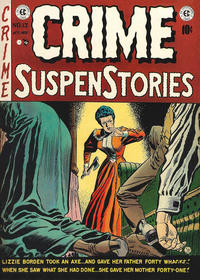 Genre
crime
Characters
Fred Reardon; Irma (Mrs. Reardon's friend); unnamed detective; Rita Waldon Reardon (villain); Vance Tobin (villain, Fred's business associate, death)
Synopsis
Rita is introduced to Fred Reardon at a party and sets her sights on marrying this rather wealthy man, even though he is stone deaf.....for his money, of course. Soon, she falls in love with Vance Tobin and together they plot to kill Fred. However, Fred is involved in a car accident soon after and regains his hearing, unbeknownst to Vance and Rita, and he overhears the plot to poison him.
Reprints

Genre
crime
Characters
Joan Forbes (Helen's sister, death); Bob (Helen's boyfriend, death); unnamed delivery man; Helen Forbes (villain)
Synopsis
Joan and Helen are at each other's throats, as Helen believes that her sister is making eyes at Bob, her boyfriend. In addition, Helen also overhears the two planning a lunch at a cafe when they will surprise her with some news. So, Helen follows the two, and when she sees the two enter a jewelry store and pick out a ring, she feels her fears are validated. Later, Helen awaits the two coming home and she kills them both....then receives a package from a delivery boy containing a wedding ring engraved to her from Bob!
Reprints
Keywords
Candlelight Cafe

Genre
crime
Characters
Helen Forbes; unnamed delivery man; Bob; Joan Forbes
Synopsis
Helen is waiting for Bob and Rita to return home and she confronts them both with a gun, accusing Joan of attempting to steal her boyfriend from her. They protest, just as the delivery man from the jewelry store arrives with the package with the wedding ring in it. Helen apologizes to Bob and Joan before Bob is to leaver on a train on business. Joan offers to drive him to the station. Thinking all is well, Helen sits down to relax and notices a letter on her night table from Joan, informing Helen that the pair have left together on the train and she will never see either of them again!
Reprints
Keywords
Martinsons Jewelry

Genre
crime
Characters
Moose (Egan's boxing manager, death); unnamed usher; unnamed Policeman; Kayo Egan (villain, boxer)
Synopsis
Kayo informs his manager that he is cutting him out of his financial arrangement as of the moment, then smashes an iron pail over Moose's head and drags the body away from the dressing room. Later, when the Police question Kayo about the crime, Kayo makes a fatal admission.
Reprints

Genre
horror-suspense
Characters
Lila Wismer (Harry's wife, death); unnamed female (death); Fred (mortician); unnamed Sheriff; Harry Wismer (villain)
Synopsis
A woman is found murdered and horribly mutilated, in a tourist cabin and the suspicion is that Harry Wismer has murdered his wife. They are wrong......at least for the time being!
Reprints

The reprint book, "50 Girls 50," lists Williamson as the sole inker.

Inker previously listed as Angelo Torres. Per Angelo himself, "I did not ink this story. I was still in Korea in November of 1952."

Genre
horror-suspense
Characters
The Old Witch (host); Sid Weston (Fanny's father, death); Ruth Weston (Fanny's mother, death); Detective Ernie Vance (death); Edith Vance (Ernie's wife, death); Dougherty (Policeman); Andrew Borden (death, in flashback); Abbie Borden (Lizzie's step mother, death, in flashback); Emma Borden (Lizzie's sister, in flashback); Maggie (the Borden's servant, in flashback); Lizzie Borden (villain, in flashback); Fanny Weston (villain); the Vance's young son (villain)
Synopsis
Fanny is 22 years old, but her parents will not let her use makeup, choose her own clothing or date boys, and she has had it up to here over it. Running up to the attic, she discovers an old hatchet, and a plan forms in her mind. Later, a detective investigates the murder of both of Fanny's parents and she pleads that she is innocent, that it was the hatchet that killed them. Later, Edith Vance tells her husband that Fanny may be right, as that hatchet was the same one used by Lizzie Borden to kill her father and step mother. Then they noticed their son had the hatchet and was coming for them.
Reprints