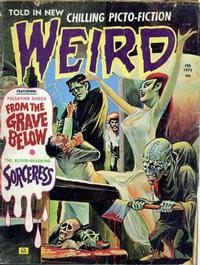 Data for this series dependent on the indexing work of Keith Smith.
Editing
View Change History
Series at my.comics.org