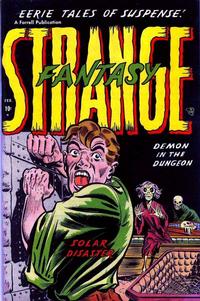 There are variants for issue #9, December 1953. The original and correct edition has Iger studios art and an early story 'Hair Yee-eeee' illustrated by Steve Ditko, as indexed by GCD. Variants for this issue utilize the original cover, with either a coverless Black Cat, Boys' Ranch or a war comic as contents and are thought to be later. Other variations may exist.
Editing
View Change History
Series at my.comics.org