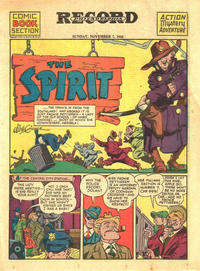 Series Details:
Publisher's Brands:
Indicia Publishers:
Notes
Free newspaper inserts. No issue numbers. The first page serves as the front cover. Format can vary depending on which paper the section was published in. Often it was in a standard Golden Age US format and saddle-stitched. Sometimes it would be printed in tabloid size as a part of the regular newspaper-sized comics.

The Greater Buffalo Press printed a Spanish language version of the section, which is listed in a separate series. There are also Mutual Benefit Society of Baltimore, Maryland editions that have no dates.

Most newspapers listed did not publish The Spirit for its entire run.
Editing
View Change History
Series at my.comics.org