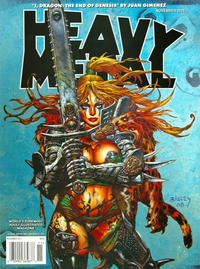 April 1977 (first issue) has no volume listed and has "Issue Number 1" on the spine.
May 1977 (second issue) through August 1977 (fifth issue) do not have a volume listed and have issue number listed only in introductory text or advertisement for back issues.
September 1977 (Vol. 1 No. 6) starts Vol. ## No. ## (mostly listed in Roman Numerals).
Volume 1 has 13 issues (April through April). Volume 2 has 12 issues (May through April).
Volume 3 has 11 issues (May through March).
Volume 4 through Volume 8 have 12 issues (April through March).

1992-1993 Under new indicia publisher, Metal Mammoth, Inc. the issue volume and number were incorrectly listed in the indicia during the first two years. Cover date and indicia date of the issue were correct. Issues are designated with the incorrect indicia designation with what it should be in brackets.

2008 with Volume 32 the seasonal specials merge into this series with the Fall 2008 Eerie Special. This continues through Volume 35.