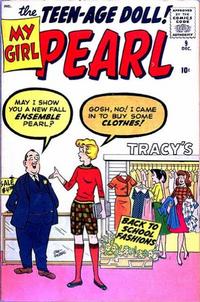 My Girl Pearl was created to be similar to the My Friend Irma radio show (and TV show and movies), but to be owned by Marvel. (Marvel had previously published a licensed My Friend Irma comic book.)

Starting with issue #7, the main characters were de-aged into teenagers and placed in a high-school setting.
Editing
View Change History
Series at my.comics.org

1
2
3
4
5
6
7
8
9
10
11
If you believe any of this data to be incorrect, please let us know.
Cover thumbnails are used for identification purposes only. All rights to cover images reserved by the respective copyright holders.