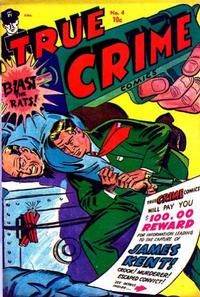 Series Details:
Indicia Publishers:
Notes
Canadian comics reprints of U.S. series: True Crime (Magazine Village, 1947 series) with page-count reduced to 36 (from 52) and other alterations as indicated:
The Canadian issues are shifted up by two (#4, reprints U.S. #2 etc); with Canadian issue #8 switching to Vol.2 (reprinting U.S. #6); hence, vol. 2 #9 is a reprint of U.S. Vol. 2 #1; the final issues for both series (The Canadian edition had limited distribution within U.K).

The U.S. covers to #2 and #3, by Jack Cole were redrawn with violence lessened; the remaining Alval issues reuse their corresponding U.S. covers.

Both countries had 'True Crime' magazines, but these are unconnected to comics series, except visually (both U.S. series came from the same publishing house); the missing early numbers are unaccounted for.
Editing
View Change History
Series at my.comics.org

4
5
6
7
v2#8
v2#9
If you believe any of this data to be incorrect, please let us know.
Cover thumbnails are used for identification purposes only. All rights to cover images reserved by the respective copyright holders.