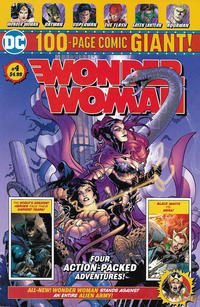 This series was sold exclusively at Walmart stores. It was part of a larger partnership with DC Comics which was launched in July 2018. When this initiative began, the titles in this program were stocked in more than 3,000 participating stores across the United States.

These exclusive DC Comics were advertised to "arrive in stores by" a particular Sunday date, typically the 3rd Sunday of the month. However, many stores had the issues on display and available for sale on the preceding Friday. It is these Friday dates that were used as the actual on sale dates.
The final issue was published in August 2019, it was replaced by a new series with the same name starting in September 2019. https://www.comics.org/series/150344/ The new series is not exclusive to Walmart.
Editing
View Change History
Series at my.comics.org

1
2
3
4
5
6
7
If you believe any of this data to be incorrect, please let us know.
Cover thumbnails are used for identification purposes only. All rights to cover images reserved by the respective copyright holders.