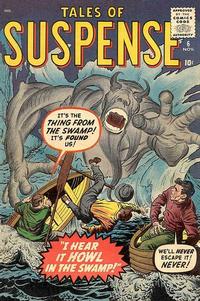 It is well known that Stan Lee (sometimes assisted by Larry Lieber, or Lieber on his own) wrote the overwhelming majority of uncredited stories in the early monster-story issues. Where there is no positive confirmation, credits may be listed as "Stan Lee ?; Larry Lieber ?", or either person individually, or simply "?", according to the indexer's best information.
Editing
View Change History
Series at my.comics.org