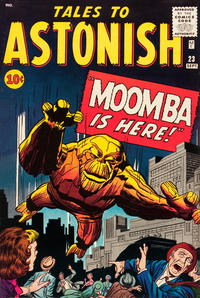 Almost all new stories were narrated in the first person to issue #17 (March 1961). Tales to Astonish included an Ant-Man/Giant-Man feature in issues #35–69 (starring a character introduced in issue #27), a Wasp feature in issues #51–58, a Hulk feature from issue #60 (October 1964) and a Sub-Mariner feature from issue #70 (August 1966). Tales to Astonish introduced Hank Pym (Ant-Man/Giant Man), the Wasp and important Hulk villains such as the Leader and the Abomination.

It is well known that Stan Lee (sometimes assisted by Larry Lieber, or Lieber on his own) wrote the overwhelming majority of these early monster stories. Where there is no positive confirmation, credits may be listed as "Stan Lee ?; Larry Lieber ?", or either person individually, or simply "?", according to the indexer's best information.
Editing
View Change History
Series at my.comics.org