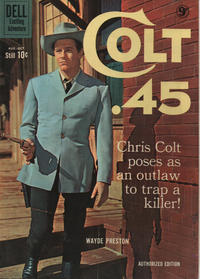 Series Details:
Publisher's Brands:
Indicia Publishers:
Notes
This series was based on an ABC western television series broadcast between 1957 and 1960 which, in its turn, was based on a 1950 Warner Bros. feature film. Wayde Preston starred in Colt .45 as Christopher Colt, an undercover government agent who concealed his identity by posing as a traveling pistol salesman. The comic book series' regular features included one-page text stories with western themes and four-page stories about characters such as Fresno, a karate-chopping Japanese-American cowboy, and his kid buddy Snubby. Issues sometimes included one-page Chris Colt stories or illustrated text articles on western life and lore.

4
5
6
7
8
9
If you believe any of this data to be incorrect, please let us know.
Cover thumbnails are used for identification purposes only. All rights to cover images reserved by the respective copyright holders.