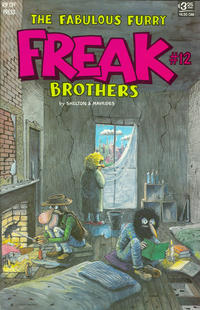 Series Details:
Publisher's Brands:
Indicia Publishers:
Notes
The Fabulous Furry Freak Brothers is the creation of Gilbert Shelton and is one of the most popular underground comix ever produced. Their first appearances were in 'The Rag' an underground newspaper, followed closely by Feds 'N' Heads (The Print Mint Inc, 1968 series)
The first of the 13 issues was first published in 1971, with Shelton collaborating on many of the stories with Dave Sheridan and Paul Mavrides.
All issues have multiple printings but without any formal identification, particularly formative editions; Issue printings are only distinguishable by variations in cover coloration, price changes, indicia information or other interior changes.
As such, determining which print requires knowledge and skill, with the possibility that hitherto unknown variants may still be discovered.
Information gathered from http://www.undergroundcollectibles.com/