Link: The Legend of Zelda 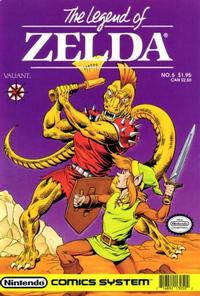 The contents of issues in the second run may vary from those in the first run.