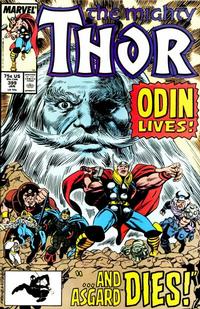 Series Details:
Publisher's Brands:
Indicia Publishers:
Awards:
Tracking:
Notes
Thor began in issue #83 of Journey Into Mystery. For other appearances look primarily in many issues of the Avengers.
The early issues are also reprinted in Marvel Spectacular. Stories from the Tales of Asgard series have been reprinted in two, one-shot comics, and in a mini-series.
Indicia title in issues #407–410 and 413–489 is "The Mighty Thor."
Editing
View Change History
Series at my.comics.org