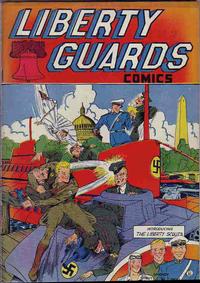 In fact, the comic is a rebinding/reprinting of Man of War Comics #1 with the cover art of Liberty Scouts Comics #3 with a new "Liberty Guards" title banner. The inside front cover, and inside and outside back covers, are Chicago Mail Order ads, and where the indicia would normally be, "THE CHICAGO MAIL ORDER COMPANY...CHICAGO" is printed in large bold letters. However, this is clearly part of the ad and not a minimalist indicia.
Editing
View Change History
Series at my.comics.org

[nn]
If you believe any of this data to be incorrect, please let us know.
Cover thumbnails are used for identification purposes only. All rights to cover images reserved by the respective copyright holders.