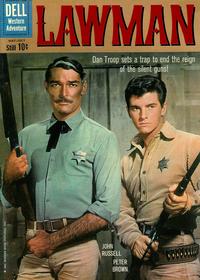 Series Details:
Publisher's Brands:
Indicia Publishers:
Notes
The 2 the Lawman issues of Four Color (Dell, 1942 series), #970 and 1035, were counted by Dell as the first 2 issues of this series.

The comic book series Lawman was based on the Warner Bros. produced ABC television series of the same name that starred John Russell as Marshal Dan Troop, teen heartthrob Peter Brown as his deputy Johnny McKay, and Peggy Castle as his saloonkeeper love interest Lily Merrill. The TV series aired from 1958 to 1962. Lawman was one of several Warner Bros. westerns produced during the late 1950s that included Maverick, Cheyenne, Bronco, Colt .45, and Sugarfoot.

3
4
5
6
7
8
9
10
11
If you believe any of this data to be incorrect, please let us know.
Cover thumbnails are used for identification purposes only. All rights to cover images reserved by the respective copyright holders.