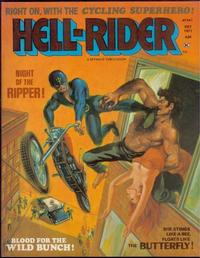 Series Details:
Publisher's Brands:
Indicia Publishers:
Notes
Hyphen in title on cover only, not in indicia.

The Hell-Rider appears to be a non-supernatural forerunner of Marvel’s Ghost Rider, which was also created or co-created by Gary Friedrich. The never published (although advertised) third issue would have featured a cover by Gray Morrow and a Hell-Rider story entitled ‘The Zodiac Killers’. Adapted from a Sam Kujava-index. Edited by Lou Mougin. Additional and new Skywald data by Rich Arndt from his Complete Skywald checklist sites at www.enjolrasworld.com & www.enjolrasworld.com/Miscellaneous/Richard%20Arndt/ and used with his permission. Edited in December 2004 by Per Sandell.
Editing
View Change History
Series at my.comics.org