Kamandi, the Last Boy on Earth 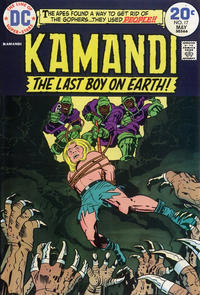 Series Details:
Publisher's Brands:
Indicia Publishers:
Notes
Created by Jack Kirby. A post-nuclear war vision of the future, loosely based on The Planet of the Apes.
The contents of the unpublished #60 & #61 appeared in Cancelled Comics Cavalcade #2. The OMAC story scheduled for #60 also appeared in Warlord #37. The Sandman story scheduled for #61 also appeared in Best of DC #22.
Editing
View Change History
Series at my.comics.org