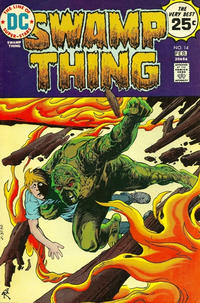 A 25th issue was written, illustrated, and scheduled for release on July 13, 1976, featuring an encounter between Swamp Thing and Hawkman in a story titled "The Sky Above" by David Kraft, Ernie Chan, and Fred Carrillo, with a cover by Chan, but the series was cancelled and it was never published. The cover and several pages from it have surfaced in various places over the years. Finally, in Swamp Thing: The Bronze Age (DC, 2018 series) #2, the surviving plot script, dialogue script, and black and white art from the story and cover were published for the first time. However the art for page 15 had been lost to time, so only 16 pages of the 17 story pages were published. Pages 1-8 had no inks or letters, while the remaining pages were fully inked and lettered.