The Mighty World of Marvel 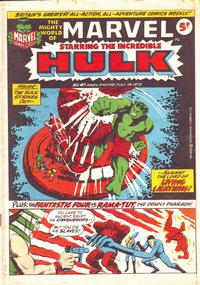 Series Details:
Publisher's Brands:
Indicia Publishers:
Tracking:
Notes
Marvel (US) reprints with some original material.
Note that, for British weekly comics, the "week ending" date given on the cover is usually the Saturday at the end of the week during which the comic was published, making these cover-dates far closer to the comics' on-sale dates than is usually the case for US comicbooks. This can mean that there is a chronological gap of c. three months between the US and UK comics conventionally listed under the same month (i.e. a US monthly with an October cover-date may have been released in July, whereas a UK weekly with such a date will have been published in October itself).
Editing
View Change History
Series at my.comics.org