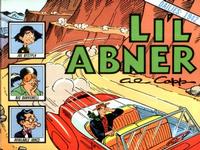 At least some Softcover editions came with a 3" high wraparound paper banner stating "Featuring the Art of Frank Frazetta" with images of Daisy Mae and Moonbeam McSwine on the front and text regarding the specific volume on the reverse. These wraparound banners are believed to be found starting with Volume 20 as Frazetta worked on the strip from 1954 to 1962.
Editing
View Change History
Series at my.comics.org