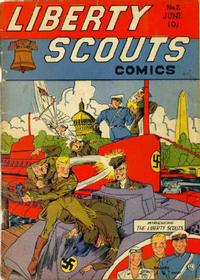 Series Details:
Indicia Publishers:
Tracking:
Notes
Becomes Liberty Guards Comics (issue not numbered) when the Boy Scouts of America Corporation forced a name change as explained in a letter from the Liberty Scouts/Guards characters in issue #3. Contents also continue in Man of War Comics #1 and 2. Liberty Guards Comics #[nn] has the same contents as Man of War Comics #1, but the former was published by (or possibly for) the Chicago Mail Order Co., presumably as a giveaway. Man of War Comics, however, was a normal Centaur/Comic Corporation of America publication.

2
3
If you believe any of this data to be incorrect, please let us know.
Cover thumbnails are used for identification purposes only. All rights to cover images reserved by the respective copyright holders.