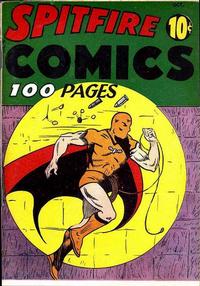 Series Details:
Indicia Publishers:
Notes
Series contents produced by Funnies, Inc., of which John Mahon was treasurer (at least early on according to a letter from Bill Everett to Jerry DeFuccio printed in the fanzine The Comics #10 and requoted in Blake Bell's "Fire and Water").

According to Mike Feldman on the comics-pub list, distributor P.D.C. likely brought this project into Alfred Harvey's 100-page pocket size experiment in order to take advantage of 4-up cover printing along with Harvey's Pocket and Speed Comics and a gag magazine called Fun Parade.
Editing
View Change History
Series at my.comics.org