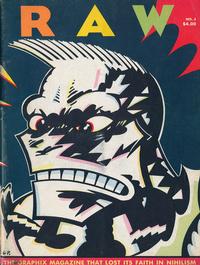 Series Details:
Indicia Publishers:
Notes
Hand-assembled with various inserts in treasury format. Includes 'Maus Chapter' #1 to #7 by Art Spiegelman as separate comics; which were affixed to inside back cover (#1, 4" x 6"; in Raw #2) or center folds (#2 to #7; 4" x 6" or 6" x 9"; in Raw #3 to #8) and sometimes seen separately.
These chapters were published in revised form as: Maus: A Survivor's Tale (Pantheon, 1986 series).
Chapter 5 has the 4-page 'Prisoner on the Hell Planet' woven into the narrative; this human holocaust story appeared originally in Short Order Comix (Head Press, 1973 series) #1

1
2
3
4
5
6
7
8
If you believe any of this data to be incorrect, please let us know.
Cover thumbnails are used for identification purposes only. All rights to cover images reserved by the respective copyright holders.