The Official Handbook of the Marvel Universe 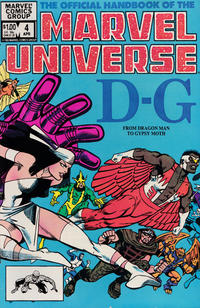 Series Details:
Publisher's Brands:
Indicia Publishers:
Notes
An encyclopedia type index of major and minor characters, places and things in the Marvel Comics Universe featuring biographical text, original art for all entries with some previously published paneled clip art.
Josef Rubinstein is listed as embellisher so it is assumed he inked all entries not specified in the credits.
Wraparound Cover joins together with the other issues in the series to make a huge poster. Giving the alphabetical order of this series, last name listed first, Arnim Zola should be listed under "Z" for "Zola" instead of "A" for "Arnim".
While some of the artwork was reused for the 1985 Official Handbook Of The Marvel Universe Deluxe Edition series the profile write-ups and most maps are completely different and much more expanded in the deluxe edition, in this series they are fairly brief and only cover a little bit of a character's history.
This was originally intended as a twelve issue maxi-series but three additional issues were added by fan demand featuring dead, inactive characters and hardware & weaponry.
No ads. Logo credited by Ron Zalme.