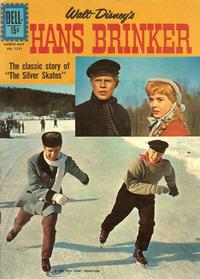 Series Details:
Publisher's Brands:
Indicia Publishers:
Tracking:
Notes
Dell usually published multiple issues of this series per month, with different features in each issue. As a series, it was held together mostly by its numbering--only the early 1940s issues carried the continuing title "Four Color"; preceding and successive issues changed titles every issue to match their contents. By convention, the entire series is referred to as "Four Color" or "Four Color comics".

For unknown reasons Dell restarted the numbering on the Series in 1942, leading fans to refer to the "first series" and "second series" or "Series I" (see Four Color (Dell, 1939 series)) and "Series II" (this series). Early issues have "Four Color Comic" on the cover. Last with this notation is #101.

There are advertisement and non-advertisement versions for many issues from #693 to the end.
Editing
View Change History
Series at my.comics.org