The Official Handbook of the Marvel Universe Deluxe Edition 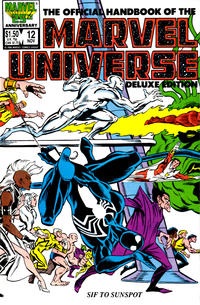 Series Details:
Publisher's Brands:
Indicia Publishers:
Notes
An encyclopedia-type index of major and minor characters in the Marvel Comics Universe featuring biographical text, original art for most entries but some art carried over from Official Handbook Of Marvel Universe (1983 series), and previously published clip art.
Josef Rubinstein is listed as embellisher so it is assumed he inked all or most entries.
All entries for Eliot Brown are for technical diagrams.
Wraparound covers join together with the other issues in the series to make a huge horizontal poster.
Given the alphabetical order of this series, where last name is listed first, Arnim Zola should have been listed under "Z" for "Zola" instead of "A" for "Arnim"; this oversight was corrected in the 2006 series, All-New Official Handbook of the Marvel Universe A-Z.

This series was meant to be followed by updates in the form of an Appendix, but that was never produced and instead the series was relaunched in 1989.
Editing
View Change History
Series at my.comics.org