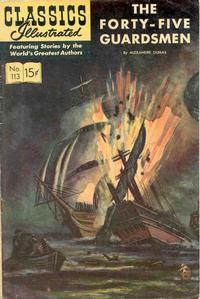 Most issues have been reprinted frequently (including issues from Classic Comics run). Reprints are frequently distinguished by the presence of a reorder checklist on a back or inside cover; the "Highest Reorder Number" (HRN) on the list allows a rough approximation of from when a particular reprint dates. Most reprints are straightforward reprints except for an updated reorder checklist and other minor matters. We are listing each and every printing of each issue, either as variants or as own indexes. Many of the older issues, however, were redone at various points in their life. These changes include new covers, new interior art, or sometimes simple page count reductions, resulting in abridged reprints. We have called out each of these different editions in their own index. An "[O]" after the issue number indicates that this was the original printing, with no reorder checklist (most of the earlier originals did not carry a checklist).

It is not uncommon for the promos to list titles that vary slightly from the cover titles. This might take the form of omitting an article (Adventures of Marco Polo, Last Days of Pompeii), adding an article (The Sea Wolf, The Lives of the Hunted), mistaking a word (First Man in the Moon), or omitting a phrase (Kit Carson).