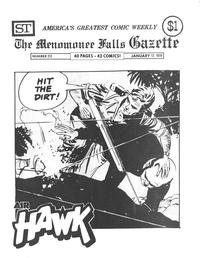 Series Details:
Publisher's Brands:
Indicia Publishers:
Awards:
Notes
The Menomonee Falls Gazette (subtitled "The international newspaper for comic art fans") was a weekly tabloid that reprinted newspaper comic strips from the United States and the U.K. Comic strips reprinted in this publication normally fell into the adventure and soap opera category. (Humor strips were collected in a sister publication, The Menomonee Falls Guardian.) Typically, a full week's worth of a particular strip was collected on a single page of The Gazette. Although The Gazette was available via newsstand distribution, the bulk of their sales came from subscriptions.

Issue #232 accidentally marked as #234 on cover (#232 on inside)
Most issues consist of two sections. Later issues were only a single section.
Editing
View Change History
Series at my.comics.org