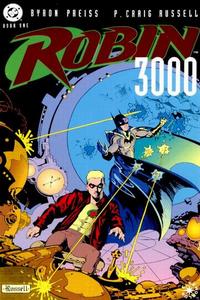 P. Craig Russell has revealed in comments (on François Peneaud's P. Craig Russell fan site) that this series was originally created as a Tom Swift graphic novel for Simon and Schuster around 1985 or 1986. It was finished, 58 pages and a cover. But after several delays, Simon and Schuster decided it was not going to be publishing graphic novels, and shelved it. After about five years, it was taken to DC, and pitched as an Elseworlds book. Tom would be re-incarnated as Robin in the year 3000 and new material would be added to incorporate Batman and bracket the story.
Editing
View Change History
Series at my.comics.org