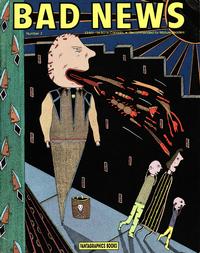 Series Details:
Publisher's Brands:
Indicia Publishers:
Tracking:
Notes
Just like with the first issue in this series, this third issue came about as a result of a class assignment in the School of Visual Arts. The first issue was a result of an assigment by Art Spiegelman, while for this issue the assignment was initiated by Paul Karasik and Mark Newgarden.

Some of the student work originally set for this issue was instead published by Spiegelman in RAW vol. 2 no. 1. Specifically, Richard McGuire's "Here."
Editing
View Change History
Series at my.comics.org

3
If you believe any of this data to be incorrect, please let us know.
Cover thumbnails are used for identification purposes only. All rights to cover images reserved by the respective copyright holders.