Boys' and Girls' March of Comics 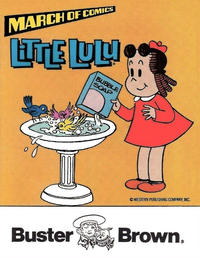 Some issues have indicia titles that only use the feature name and do not have "March of Comics" in them (although that may be on the cover). This is true of at least #2 and #91.

Catalog of Copyright Entries lists the publication as "Boys' and Girls' March of Comics."

Inside front cover, inside back cover and back cover may contain ads from various shoe companies that gave the comic away.
Editing
View Change History
Series at my.comics.org