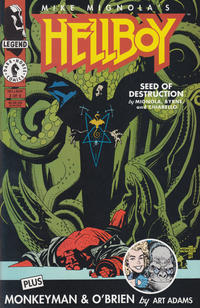 The first issue of this four-issue series is the first Hellboy comic book. Future Hellboy one-shots and limited series continue its numbering next to the Hellboy logo on their title pages, although all are discrete series according to the titles and issue numbers in their indicia. The next Hellboy comic book and fifth overall Hellboy issue is Hellboy: The Wolves of St. August (Dark Horse, 1995 series) #[nn].