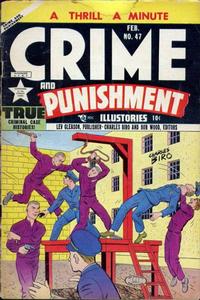 Series Details:
Publisher's Brands:
Indicia Publishers:
Notes
Companion title to: Crime Does Not Pay (Lev Gleason, 1942 Series); the first seven issues were printed in Canada, with indicia as 'Crime & Punishment'; the remainder were printed in U.S.A. as 'Crime and Punishment'
There was also a contemporaneous all-reprint series from Canada: Crime and Punishment (Superior Publishers Limited, 1949 series); early issues of the two series are difficult to differentiate except by checking for U.S. or Canadian advertising.

There was also a 'Crime and Penalty' #1 mock-up; only one known copy; which utilised Crime Does Not Pay #59 (January 1948) for the contents; apart from a change to the title header, the cover is otherwise identical to the regular Crime and Punishment #1 edition; It's possible the title was abandoned due to its similarity to: Crime Must Pay the Penalty (Ace Magazines, 1948 Series) #33(first issue; February 1948)