The Melancholy of Suzumiya Haruhi-chan 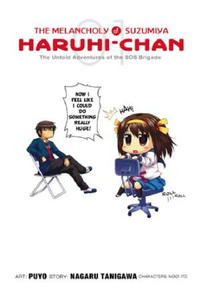 A parody manga series of the same name based on the Haruhi Suzumiya (涼宮ハルヒ) light novel series written by Nagaru Tanigawa (谷川流) and illustrated by Noizi Ito (いとうのいぢ). Not to be confused with the eighteen volume series "The Melancholy of Haruhi Suzumiya" (Hachette Book Group USA, 2008).

1
2
3
4
5
6
7
8
9
10
11
12
If you believe any of this data to be incorrect, please let us know.
Cover thumbnails are used for identification purposes only. All rights to cover images reserved by the respective copyright holders.