Adventures into the Unknown 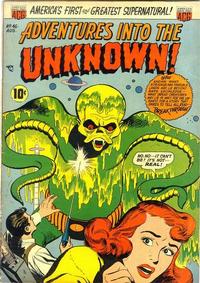 Unlike many American horror comics of the Golden Age, it weathered the public criticism of the early 1950s and survived the aftermath of the Senate Subcommittee on Juvenile Delinquency hearings of April and June 1954 when the comics industry attempted self-regulation with a highly restrictive Comics Code.
Editing
View Change History
Series at my.comics.org