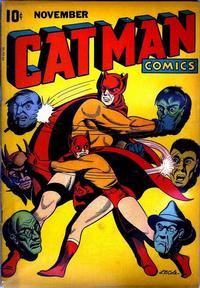 (v2#5 in the 2nd numbering sequence doesn't exist, but there's a gap in its schedule corresponding to v3#8 in the other sequence that would fit perfectly)

See the series notes for full details including an explanation of v3#13 and other oddities.
Notes
Formerly listed as "Catman Comics" (with no hyphen). Indicia title is "Cat-Man Comics" from #v1#6 (1) to #30, and "Catman Comics" for issues #31 and #32.

This series has a complicated numbering scheme which has been further complicated by a number of long-repeated errors and omissions. However, the numbering becomes more clear when set next to other comics being published by the same company at the same time, in particular Captain Aero Comics. Looking only at the indicia numbers, they can be explained (mostly) as follows:

v1#6 picks up the numbering of Crash Comics Adventures which was published by Tem Publications, Inc. (a predecessor of initial Cat-Man publisher Helnit Publications, Inc.) and ended with issue v1#5. Cover numbers start here with #1.

Indicia numbering continues under v1 up through issue #12 (not issue #10 as often reported), and then switches to v2 without interrupting the issue numbers which continue with #13-15. One might speculate that this was done after issue 12 as it would normally be a year's worth of monthly issues and rolling the volume forward after a year was fairly common, with or without resetting the issue number.

After #v2#15, the volume moved to v3 and this time the issue number reset to #1. This seems random, but Henry Andrews observes that this was done the same cover month that Holyoke Publishing Co., Inc. (which had taken over with #v1#12) began publishing Blue Beetle, formerly a Fox Publications, Inc. title. Holyoke's other title at the time, Captain Aero Comics, would go to #v2#1 the next cover month. While this is entirely speculation, one might think that Holyoke was marking a fresh start. There is absolutely no concrete evidence for this, though.

Cat-Man's v3 continues through the end of Holyoke's publication tenure. When Et-Es-Go Magazines, Inc. (owned, as Helnit and Tem were, by Frank Z. Temerson) resumes publication, an issue of Cat-Man is its first issue and resumes with v3#8, the next number in the sequence. The following issue is one of the more puzzling changes, though, moving *backwards* to v2#6.

Cat-Man continues with the v2 numbering until the last Et-Es-Go Magazines, Inc. issue, which is v3#13, again apparently at random. However, Henry observes that Frank's "switch with Captain Aero" theory applies here as well. The prior issue of Captain Aero was v3#12, making this issue of Cat-Man the next in that sequence. Captain Aero would publish its own v3#13 issue the following month (also its final Et-Es-Go issue). Both of these v3#13 issues are also the first issues in the series with no cover number.

Finally, there is a four month gap in publication and the volume-based indicia numbering disappears altogether. Cover numbers return and now match the indicia numbers, but are off by one (#27 when it should be #28). No theory has yet explained this. It may be a simple miscounting (not unheard of), but Captain Aero's switch to whole numbering is much farther off (#21 instead of #18), suggesting that there may have been some other source explaining both unexpected numbers.
Editing
View Change History
Series at my.comics.org