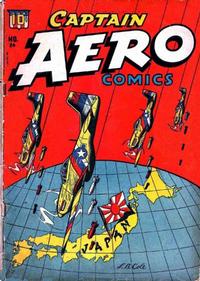 Series Details:
Indicia Publishers:
Tracking:
A common theory has held that this series' numbering continued from Samson (Fox, 1940 series), but that seems to be based on Holyoke Publishing Co., Inc.'s acquisition of Blue Beetle from Fox, and the fact that Fox's Samson series ended a six issue run at about the right time. However, the first issue of Captain Aero was published by Helnit six months before Holyoke acquired Blue Beetle (and one month before Holyoke completely took over Helnit's remaining titles). While Harvey would eventually continue Green Hornet Comics' numbering, that would not happen until five months after Captain Aero began, and was probably based on continuing from the earlier issues under the same title rather than postal regulations as it was a completely separate company.

There are two distinct sets of tracking links:

(v2#5 in the 1st numbering sequence doesn't exist, but there's a gap in its schedule corresponding to v3#8 in the other sequence that would fit perfectly)

See the series notes for a full explanation including additional numbering oddities.
Notes
This series has a somewhat complicated and confusing numbering scheme, but most of it becomes clear when considered alongside Cat-Man Comics, which was published by the same companies throughout the run of both titles.

See the tracking notes for a discussion of the theories behind the starting indicia number of v1#7. Things continue just fine through v1#12, after which they reset to v2#1. This is a common enough occurrence, and only looks at all strange in conjunction with other renumberings. See the Cat-Man entry for a discussion of how this lines up with other Holyoke events.

The jump from v2#4 to v3#9 seems random, but Frank Motler observes that v3#9 would have been the correct number for the Cat-Man issue that came out that same month. That Cat-Man issue was numbered v2#6, and if one assigns v2#5 to the month in which Cat-Man produced its first issue under Et-Es-Go Magazines, Inc. but Captain Aero did not produce an issue, then it appears that Captain Aero and Cat-Man simply switched numberings.

Captain Aero stops using cover numbers with v3#13, also the last Et-Es-Go issue. This number was also "borrowed" by Cat-Man the prior month for its first non-cover-numbered issue, although this time it returned to its regular sequence the following issue. Captain Aero then resets to v4#2. The fate of v4#1 is something of a mystery. It could have simply been forgotten, or somehow considered to be synonymous with v3#13 on the grounds that the volume should have reset after issue #12 as it did between v1 and v2. All of this is pure speculation, however.

Captain Aero put out one more v4 issue with no cover number, and then abruptly jumped to whole #21 (same in the indicia and on the cover). This jump could have been carelessness, or the mismatch here and with a one-issue-backwards jump to whole numbers with the next issue of Cat-Man may both be explained by something else.
Editing
View Change History
Series at my.comics.org