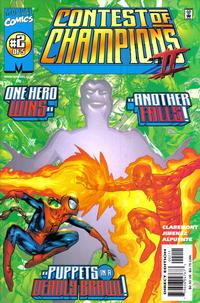 Series Details:
Publisher's Brands:
Indicia Publishers:
Notes
A sequel (in concept only) to Contest of Champions (Marvel, 1982 series), and a sequel to the original Brood saga in Uncanny X-Men (Marvel, 1981 series) #154-167. Issues 3-5 contain the 3rd-5th appearances of Lockdown and Rosetta Stone, after Fantastic Four (Marvel, 1998 series) 17-18.

This was intended to be biweekly, but production delays resulted in a slightly irregular publication schedule (which is why two issues are dated September, one October, and two November).
Editing
View Change History
Series at my.comics.org