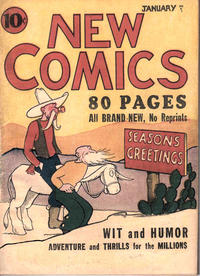 Series Details:
Indicia Publishers:
Tracking:
Notes
Adventure Comics began its nearly 50-year run in December 1935 under the title New Comics, which was only the second comic book series published by National Allied Publications, now DC Comics. The series was retitled New Adventure Comics with its 12th issue in January 1937. Issue #32 (November 1938) saw the title changed again to Adventure Comics, which would remain the book's name for the duration of its existence.


Originally a humor series, it evolved into a serious adventure series, which helped give it a focus distinct from its sister title New Fun/More Fun and prompted its own title change to New Adventure.

New Comics also pioneered the half-tabloid-size that would soon become the standard size for American comic books. It was followed almost immediately by New Fun, which switched to the new size when it became More Fun Comics.
Editing
View Change History
Series at my.comics.org