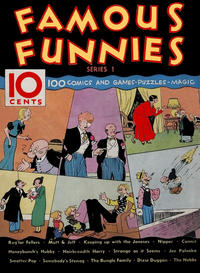 While "Famous Funnies- A Carnival of Comics" ( http://www.comics.org/series/66/ ) had been sold in stores for 10 cents as an experiment by Max Gaines, it was originally a giveaway comic. This issue, however, was the first in the "modern" comic book format intended for direct sale to the public (in chain stores rather than newsstands) from the beginning, with a print run of 35,000. Its success led to the ongoing "Famous Funnies" title ( http://www.comics.org/series/68/ ), although Dell opted not to continue so Eastern Color became that series' publisher.

[nn]
If you believe any of this data to be incorrect, please let us know.
Cover thumbnails are used for identification purposes only. All rights to cover images reserved by the respective copyright holders.