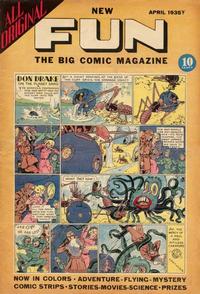 Series Details:
Indicia Publishers:
Tracking:
Notes
In the latter half of 1934, having seen the emergence of Famous Funnies and other oversize magazines reprinting comic strips, Major Malcolm Wheeler-Nicholson founded National Allied Publications and published New Fun #1. It was an anthology of humor features, such as the funny animal comic "Pelion and Ossa" and the college-set "Jigger and Ginger", mixed with such dramatic fare as the Western strip "Jack Woods" and the "yellow peril" adventure "Barry O'Neill", featuring a Fu Manchu-styled villain, Fang Gow.

Most significantly, however, whereas some of the existing publications had eventually included a small amount of original material, generally as filler, New Fun #1 was one of the first American comic books containing all-original material (though not THE first -- it was preceded by Dell's The Funnies in 1929). Additionally, it carried advertising, whereas previous comic books were sponsored by corporations such as Procter & Gamble, Kinney Shoes, and Canada Dry beverages, and ad-free.

The first four issues were edited by future Funnies, Inc., founder Lloyd Jacquet, the next, after a three-month hiatus, by Wheeler-Nicholson himself. Issue #6 brought the comic-book debuts of Jerry Siegel and Joe Shuster, the future creators of Superman, who began their careers with the musketeer swashbuckler "Henri Duval" (doing the first two installments before turning it over to others) and, under the pseudonyms "Leger and Reuths", the supernatural adventurer Doctor Occult. They would remain on the latter feature through issue #32 (June 1938), following the magazine's retitling as More Fun and More Fun Comics.

The features in this oversize series often took up less than a full page, with filler strips (generally one row of panels) occupying the remainder of the page. Given the scarcity of these issues, such fillers are often unknown and unindexed.
Editing
View Change History
Series at my.comics.org

v1#1
v1#2
v1#3
v1#4
v1#5
v1#6
If you believe any of this data to be incorrect, please let us know.
Cover thumbnails are used for identification purposes only. All rights to cover images reserved by the respective copyright holders.