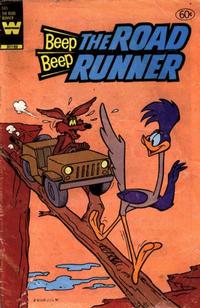 Series Details:
Publisher's Brands:
Indicia Publishers:
Notes
Series is based on the characters from the Warner Brothers cartoon series, but differed from the cartoons in several ways: the Coyote and the Road Runner were given dialogue, the Road Runner was called "Papa Beep", he had a wife and three sons, and the road runners spoke in rhyme all the time.