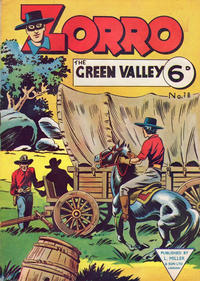 S.N.P.I. is quite possibly the French packager of the material, which seems to have been from a French newspaper strip.

The character, although a masked vigilante, bears no relation to the Johnston McCulley character, further expanded on by Hollywood and Walt Disney.
Editing
View Change History
Series at my.comics.org