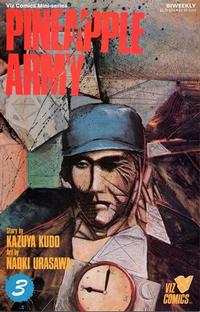 Ten self-contained stories by the writer of MAI,THE PSYCHIC GIRL about a freelance combat instructor who trains people to fight their own battles, but refuses (often unsuccessfully) to get involved himself.

Series cancelled well before completion. It went to eight volumes in Japan. The panels are flipped to read in the Western left-to-right format.

1
2
3
4
5
6
7
8
9
10
If you believe any of this data to be incorrect, please let us know.
Cover thumbnails are used for identification purposes only. All rights to cover images reserved by the respective copyright holders.