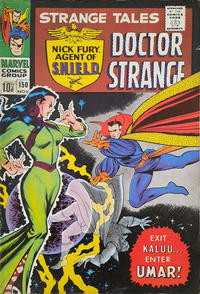 Series Details:
Publisher's Brands:
Indicia Publishers:
Awards:
Tracking:
Notes
Launched as a science-fiction/horror anthology along with Mystic (Marvel, 1951 series), increasing Marvel's science-fiction line from four to six books. This book, along with World of Fantasy (Marvel, 1956 series), was one of only two science-fiction anthologies to resume publication immediately following the publication hiatus caused by the collapse of Marvel's distributor and the subsequent restructuring known as the "Atlas Implosion".

Scripts were generally not credited before the superhero days. However, it is well known that Stan Lee (sometimes assisted by Larry Lieber, or Lieber on his own) wrote the overwhelming majority of these stories from 1959 to 1963. Where there is no positive confirmation, credits may be listed as "Stan Lee ?; Larry Lieber ?", or either person individually, or simply "?", according to the indexer's best information.