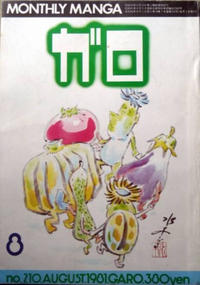 Series Details:
Publisher's Brands:
Indicia Publishers:
Notes
The highly influential underground magazine. Bought out in 1991 by a gaming company and continued for a number of years after that though all issues are listed here.

Issues until January 1989 are numbered on the cover as well as being dated. After this time the number appears on the contents page but not on the cover.

Images and some text about all issues (in Japanese) is available at http://blog.goo.ne.jp/poyota280.