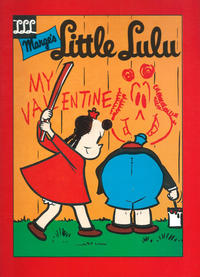 Series Details:
Publisher's Brands:
Indicia Publishers:
Notes
Reprints a long run of Little Lulu comics from the period when John Stanley was writing the stories. Most of the stories collected were drawn by either Stanley or Irving Tripp.

The six three-volume boxed sets reprinted the ten Little Lulu issues from Four Color (Dell, 1942 series) as well as issues 1-87 of Marge's Little Lulu (Dell, 1948 series). Besides reprinting the Little Lulu stories, each set contains background articles on the artists, essays, and previously unpublished art. The artwork of most of the Stanley-drawn stories in the books, however, was traced, as photostats for them did not exist.

The sets were published in reverse order, with Set VI coming first and Set I last.

The contents of the books were later scanned and republished (minus background material) as the first 18 volumes of Dark Horse Comics' 2005 Little Lulu reprint series, which then continued on in full colour, reprinting Little Lulu comics that Another Rainbow had not managed to get to.